Why does this paintball blog exist? 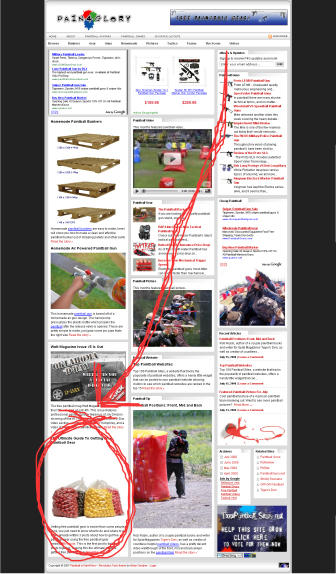 It all started one afternoon with a call from a friend. Little did I know that this one call would unlock the drive for me to succeed in life. You see, many find their calling later in life, but its when you find it at such a young age (for me 11), you find a real need to jump the gun, and jump the gun I did.

My friend had been telling me about this new up and coming sport called paintball. A sport where people would go out in the woods and shoot each other with co2 powered guns that launched capsules filled with paint. He said he had bought a couple hundred rounds of the paint and wanted to try playing it with my brother and I. Needless to say I was in complete disbelief that a sport like that actually existed… I mean the whole idea of paintball sounded way too good to be true.

I knew I had to try this new sport, but being empty as air in the money department, I had to come up with a better way to get into it. The next best solution was to bust out the trusty sling-shot and do things the old fashioned way.

The next day after school, after spending all my money on a canister of paint (200 rounds, which seemed like a lot at the time), and hours making a homemade mask and armor to go along with it, I was ready. The three of us, all in homemade gear, and armed with slingshots, stepped out onto my parents front yard and played paintball.

For some reason, it ended up being me vs. my brother and friend. Let’s just say this charted not only the beginning of my paintball experience, but also my experience of playing as the underdog. With only four trees in the front yard, two on each side, cover was limited, but fun wasn’t. Despite the fact that I was shot the most out of the group (go figure), I had a blast. It was a landmark moment of my life, a day that I not only felt the thrill of paintball, but a day I also understood the importance of playing with real protective gear… more importantly a mask made for paintball. Having someone run by you and slingshot you between the eyes while only wearing a mask made from cardboard and a 2-liter bottle is like having Jesus smack you with a “duh” stick.

Regardless, I felt it. A burning desire to make enough money to play paintball with real gear. It wasn’t until I was introduced to a $15 Vulcan pump marker kit that I was able to convince my parents to let me take the next step into the sport (you know, actually play with markers).

I quickly got enveloped in the sport and like many paintballers, wanted better paintball gear. Still too young to work I turned to other things to fund my addiction. My parents eBay account was the answer (no… not their pockets, I hated asking them for money), and quickly developed a system for making money for paintball through paintball.

It was ingenious, and it allowed me to make more than enough to play paintball all through high school. It was then that I decided to open a paintball field with the extra money I had. To me the experience was a success, and a pivotal moment in my life where I found my purpose.

It wasn’t always easy, but in the end it was all worth it, which is why paintball to me is and always will be pain for glory.

“In this world it is not what we take up, but what we give up, that makes us rich.“

“Great achievement is usually born of great sacrifice, and is never the result of selfishness.”

“The important thing is this: to be able, at any moment, to sacrifice what we are for what we could become.”

“A man can be as great as he wants to be. If you believe in yourself and have the courage, the determination, the dedication, the competitive drive and if you are willing to sacrifice the little things in life and pay the price for the things that are worthwhile, it can be done.”