Paintball is a fun, popular activity, and manufacturers have created a wide variety of options and styles at all different cost levels, even in the $1,000 range. But, do not be fooled into thinking you have to spend a small fortune to get into the game. There are many quality paintball guns priced under $150, so anyone can join in the excitement of paintball. 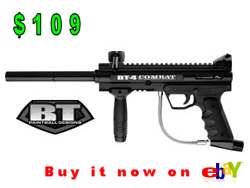 This gun touts a lightweight aluminum construction, which makes for a durable gun that is easy to carry. This is a semi-automatic gun that has Picatanny rails to attach accessories; it is accurate to around 150 feet, and it is able to shoot 13 balls per second. This gas and compressed air compatible gun only costs $109. 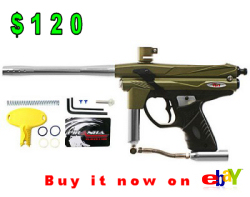 This is a tournament grade semi-automatic, 10 shot per second paintball gun that is priced around $120. And, since the GTI Rampage has a double trigger frame, a player is able to put two fingers at once on the trigger, allowing for a faster shot per second rate. This aluminum, corrosion resistant gun has an adjustable velocity screw and a rear cocking knob. 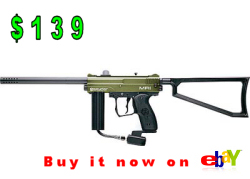 At $139.95, this military-style semi-automatic gun comes in a matte finish of black or olive to reduce glare, making it great for play on wooded fields. This gun has a slide pull-out pin, 2 finger aluminum trigger frame, and it has a no slip rubber grip that provide the paintball player with a comfortable, steady hold during play. 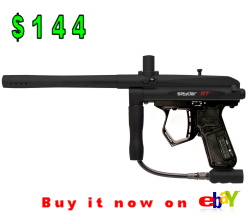 This $144 aluminum gun has a double finger trigger, runs on gas or compressed air, and has four adjustable firing rates: fully automatic, semi-automatic, 3 round burst, and 6 round burst. There is also a semi-automatic lock to meet most tournament standards. Another great feature: an anti-chop double ball feed system that will keep every shot consistent and smooth. 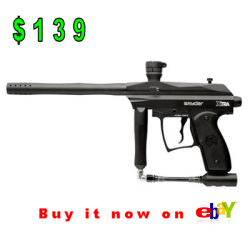 This gun comes in a matte black or pewter finish and is completely aluminum; it runs on gas or compressed air, has a 2 finger trigger, and a 10 inch barrel, making it ideal for scenario players. Also, this $139.95 gun shoots an impressive 240 to 300 feet per second. And, when you need to perform maintenance, it has a Tool Free Striker Plug. 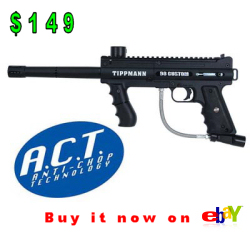 This $149, semi-automatic Tippmann gun is made from aluminum die-cast and runs on gas or compressed air. With a 200 capacity hopper, 150 feet accuracy range, 19.6 inches total length, 8 balls per second firing range, quick release feeder elbow, and a removable front grip, the paintball player will find this gun to be highly versatile. 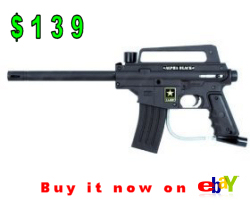 There is nothing “basic” about this paintball gun. The $139.99, electric powered, die-cast aluminum gun features an 11 inch ported barrel for better accuracy and greater noise reduction and an eGrip frame. Whatever the player’s firing needs are, this gun can meet it with 5 different options: turbo, automatic, semi-automatic, full safety auto, and a 3 shot burst. 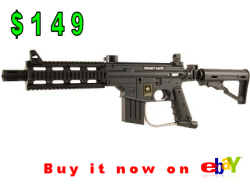 For only $149.99, this pain gun has an aluminum die-cast receiver, stainless steel gas line, and quite a lot of features. First, this semi-automatic touts a folding and collapsible stock, front shroud with Picatinny rails, 11 inch quick thread barrel, and a high performance in-bolt system. The most convenient feature: the magazine clip that also functions as a tool kit. 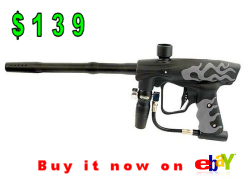 This $139 paintball gun has features and great looks. It is a black, thermoplastic, lightweight gun with a gray flame design. This gun is not only about looks, but also about playability. The features a paintball player will appreciate the most: 12 inch barrel, adjustable regulator with gauge, low pressure operation, and the ability to shoot 20 paintballs per second. 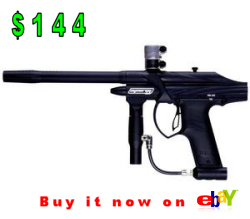 Players will be surprised what $144.95 can buy them. This gun comes with a LED light system that indicates the firing mode and battery status. It features an open bolt system, which is perfect for every skill level, and it can shoot up to 22 balls per second. Weighing only 2 pounds and 3 ounces, this gun can be easily carried around the field.

No matter what brand of paintball gun you decide to purchase, any of the above models will not disappoint. And, since all of these paintball guns are priced below $150.00, but still have impressive features, you will be getting a quality gun for a low budget price. So, get out on the battle field and have a blast.